The first photo in this new Photo Friday feature here on GrooveTraveler is a photo that’s very dear to me, a photo that I’m simultaneously very proud and very embarrassed of.

As my music-conscious readers might have spotted, this is a photo of none other than Jarvis Cocker (yes, he of Pulp fame). The other inferior creature is myself. Here we are, in a photo together, him looking all cool and “Jarvisy” and me having a brain meltdown.

Back in the nineties when I was awkward self-conscious teenager (Will: not much has changed…) I had this notion of London being the coolest place on earth. The music, the scene and the city seemed like it was buzzing and for a Beatles and Britpop loving youngster from tiny Iceland, it became my Mecca. I later found out that this was possibly due to a successful “Cool Britannia” campaign made by Tony Blair and co. which obviously seeped into my unwitting juvenile mind. The only thing is that it stuck and it made me into what the dictionary calls it; an Anglophile.

The teenage mutant me grew up and my penchant for Britpop only got stronger. It started with Oasis in my sullen teenage days but quickly dropped them for a more joyful variety of Supergrass and Blur and finally, with a more mature palette, I began to savour Pulp with their witty lyrics like a fine wine. As a result I also became slightly obsessed about Jarvis Cocker, in a friendly way, not the scary way… I think.

So when I found myself unwillingly stranded home in Iceland after a difficult time abroad a couple of years ago, serenaded by Jarvis, I realised that I needed to fulfill my teenage dream of living in London. So I did and Pulp’s Do You Remember The First Time somehow became the theme tune of my London adventure (the opening swooshing sound also reminds me of the Overground passing next to my East London flat.) When I finally got the chance to see Pulp live last summer in Hyde Park my pitiable little self actually cried with joy hearing all my favourite songs and seeing Jarvis’ long limbs dancing around the stage.

It’s been almost two years now since I made the move to London and during that whole time it’s been a running joke with me and my friends that there’s a death sentence for anyone who sees Jarvis Cocker around London before I do. Which finally brings me to the photo in question, because luckily for my friends, I finally spotted him! (Will: I spotted him ages ago though…)

It was only a couple of weeks ago that I was lazily looking out the window at work when I saw the unmistakably tall skeletal form of Jarvis passing by, and like a proper fangirl I jumped and clapped and screamed (oh yes, there are witnesses!) He headed towards the antiques market around the corner with his friend and so, egged on by my workmates, I casually decided to go out on lunch and browse around the market myself. Stalking? Me? Never!

Sure enough, there he was, in all his cool Jarvisness browsing through some vinyl records at a market stall with me watching and hiding in the distance  with no idea of what to do next. Then I realised that I’m an obsessive-compulsive analogue photographer and I always carry a camera on me! On that day I had a compact 80’s Canon SureShot Sleek camera which is very bland and ugly looking but surprisingly sharp. It was loaded with a Chrome slide film that’s quite flattering when cross-processed so it would do the job nicely if I’d manage to work up the courage.

So I had two options, either I would ask for a photograph with him and make a fool of myself in the process and feel embarrassed for a week after, or I would regret not doing it forever. I decided to swallow my pride and went with the first option. I slowly approached him and his friend with the camera in my hand, his friend noticed me first and he muttered something to Jarvis which I’m sure was something along lines of “there’s a crazy looking fan over there trying to get your attention.” The following scenario went something like this:

Me: “hiiii… sorry to bother you”

Me: (fumbling, blushing) ” eeerm I usually never do this, but I’m a big fan…oh god I’m such a twat!”

Jarvis: “Oh no don’t say that”

Me: “Thank you! I Really like your new radio shows by the way”

Jarvis: “Yeah, well that’s kind of done now but I enjoyed making them”

Me: (some nervous half laugh snort)

Jarvis: “My friend here can take the photo, he’s quite good at that”

(Handing camera to friend, turning around to pose and knocking over some teacups at the stall behind)

Jarvis: “So what’s your name?”

Me: (half vomiting it out in embarrassment due to teacup incident) “Svala…”

Pose, flash, done. (Fuck, I looked like an idiot)

Me: “Well, thanks so much… and sorry to have bothered you” (I’m gonna go home and die now)

Me running away in a turmoil of victory and humiliation and cursing my penchant for stupid analogue technology that makes it impossible to see the image until a weeks time! 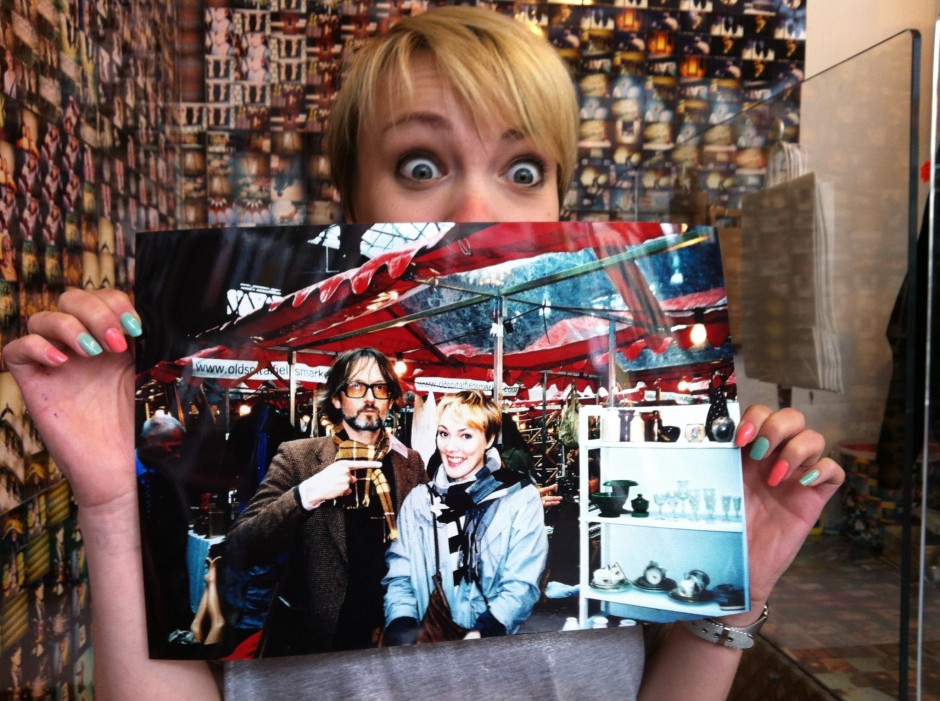