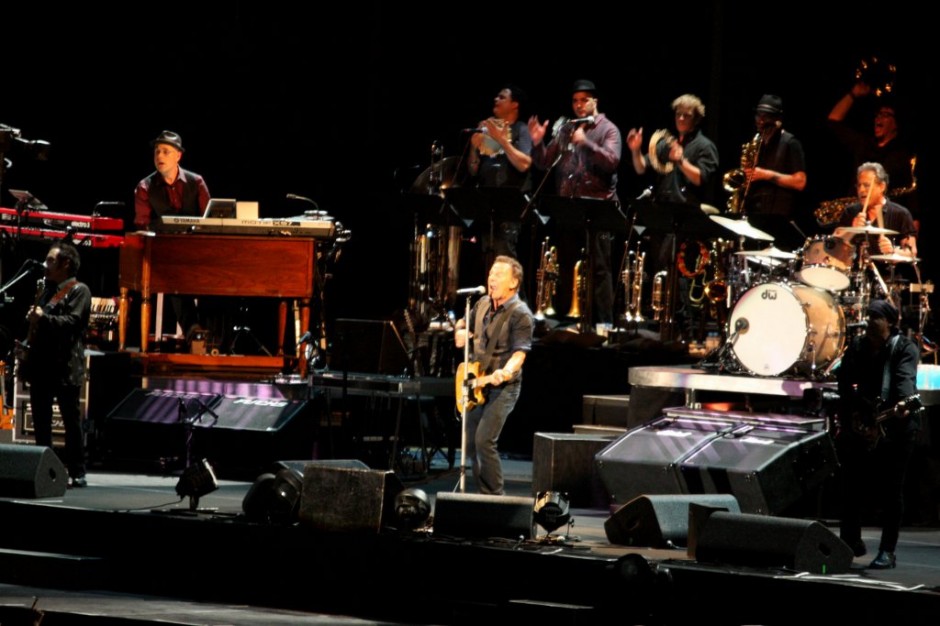 Bruce Springsteen and an enlarged E Street Band have been out on the road since March to support the album “Wrecking Ball.” The group had a long jog through Europe earlier in the year. They will hopscotch across the U.S. and play a few gigs in Canada before wrapping up the tour in early December. So far, the tour has earned at least $80 million. Bruce Springsteen tickets are on sale now.

The play lists from the tour have featured many songs from the new album as well as numerous past hits. Shows have typically lasted nearly three hours. Most shows have also included at least one tribute to deceased sax man Clarence “The Big Man” Clemons. There is usually a reference to the longtime band member during the introductions. A second tribute occurs during the song “Tenth Avenue Freeze-Out.” At the line “And the big man joined the band,” the musicians go silent while a video montage is played.

The quality of the concerts on the tour is classic Springsteen. He’s all over the stage interacting with the crowd. There have been a variety of surprise guests, and at several concerts he’s brought a family or audience member up on stage to dance or sing along. He and Paul McCartney even got shut down by the police for jamming too late into the night in England at the Hard Rock Calling Festival.

There’s always plenty of shared love between Springsteen and his fans, but the latest album doesn’t have a lot of love to give. It is a dark and angry album, full of recrimination and despair about the plight of the working class in America today. Unlike in previous records, there is little hope that America will remember her better older self in these songs. The only mildly optimistic tune is “Land of Hope and Dreams.” It has the bouncy driving guitars and familiar wall of sound, but the lyrics are wistful and sad.

“Wrecking Ball” borrows heavily from other genres for the melodies and singing style. “Death to My Hometown” could be an old Irish pub song from the 1800s. “Jack of All Trades” and “Shackled and Drawn” would fit in with a country or rockabilly band’s repertoire. There are elements of folk, gospel and hard rock all intermingled to hammer home the album’s theme.

Springsteen’s music has always contained elements of working-class anger at the injustices of life, but Wrecking Ball” pulls no punches in pointing out the grim state of the modern world. The album is full of rage and frustration at a society that sometimes fails to hold itself accountable. The despair of the working and middle classes is laid bare for all to see.

Springsteen has tapped into the loathing so many feel about today’s globalized yet minimized world. He and the band take that rage and turn it into a high energy display of defiance, making the new Bruce Springsteen tickets a must-have for music buffs.