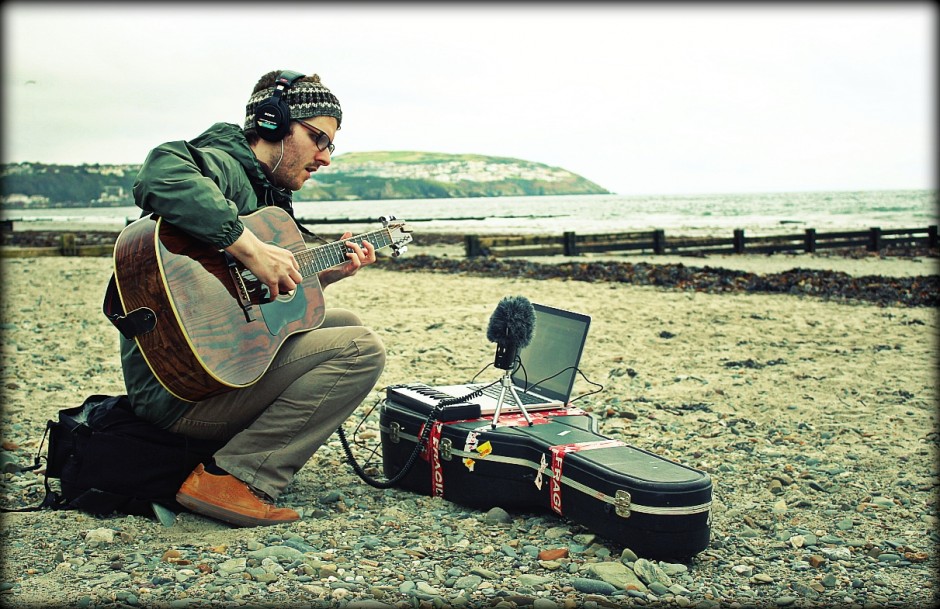 One of the benefits of being an independent musician is that you can choose to experiment with instruments (and making sound with non-instruments) in ways that the mainstream artists could never dream of doing…at least not for a radio release. A label might let a top 40/mainstream musician bury something instrumental in the background of a track somewhere in the middle of an album but for the most part, the major labels want everybody to sound the same.

The indie guys and gals, though: they can do pretty much whatever they want. All that matters is that it sounds good.

For example, on The Doubleclicks’ new album Dimetrodon, the nerd-folk duo plays around with a Theremin (remember bizarre almost singy sound in the Star Trek theme song? That’s a Theremin) on the remix of their song Godzilla. They have also had great luck incorporating a “cat keyboard” (yes, the same one you can find at most Target stores) into a lot of their songs in surprisingly non-obnoxious ways.

Pomplamoose, well known for their interesting YouTube videos, has been known to utilize an array of interesting instruments, including the melodica and glockenspiel.

Edward Sharpe and The Magnetic Zeros – and its large group of rotating members – have utilized a ukulele, marimba, didgeridoo, mandolin, charango, ronroco, and clavinet in their songs.

Marian Call is well known for using a rain stick as her primary percussion instrument when she plays live. She has also turned playing the typewriter into an art form.

Nearly all of the members of The Decemberists play several instruments. In addition to guitar, Chris Funk also plays dulcimer, mandolin, and pedal steel guitar. Their pianist, Jenny Conlee, also plays the accordion which gets the spotlight in their song “Mariner’s Revenge.”

Of course, figuring out how to make your sound distinctive in a cacophony of indie musicians all trying to do the same thing and trying to turn weird objects into instruments isn’t easy. One of the best ways to do this is to listen to music that you love (by both the indie and the mainstream guys’ weird tracks) and try to pick out instruments that you can’t immediately identify. There are more of them than you think! Check it out:

Ocarinas: Ocarinas were launched into every day awareness of the masses when the Legend of Zelda: Ocarina of Time was released. Because of them, many people have also been introduced to other unique instruments by default. There is even a musical group called the Chuckerbutty Ocarina Quartet that plays ocarina covers of popular music like The Can Can, the Tarantella, and even opera music. Jeffrey Bützer has been known to play one in his performances, but whether he’ll break it out with his group, Jeffrey Bützer & The Bicycle Eaters, is uncertain.

You can get Ocarinas in many different sizes and shapes — including animal shapes — in an array of colors and styles. Take a peek at the ones sold by Songbird to get an idea of how wide an assortment there really is.

Melodica: This is a truly interesting instrument that crosses genres. It looks like a piano but is truly a woodwind with sounds created by the piano keys. Modern melodicas were created in the 1950’s and were originally used in jazz bands.

Several indie bands have formed an obsession with this instrument. Gorillaz, Modest Mouse, Ratatat, and Franz Ferdinand have all been known to feature a melodica in their performances.

Harmonium: This portable organ is a cousin to pipe organs commonly used in churches. Also called a pump organ, it’s a member of the reed organ family that utilizes foot bellows to create it’s warm sound. Several mainstream bands have shed light on the harmonium. Bands like Freelance Whales, Sigur Rós, Tom Waits, and Shilpa Ray and Her Happy Hookers have brought out it’s true beauty.

Jew’s Harp: Also called the “mouth harp,” the Jew’s Harp is not as common as it once was so, reviving this little gem and making it current shouldn’t be too large a feat.

They are typically made of flexible metal or bamboo and are partially placed inside of your mouth and plucked with a finger. It may take a little getting used to the sensation it causes in the mouth, but it’s a fun little instrument that’s also easy to carry.

A lot of musicians and bands over the years have used this instrument in their work. Among others, Leonard Cohen (a favorite of indie and mainstream musicians alike) was a huge fan.

Igil: Most people have never seen or heard of these, but they can still be found or made. The Igil is a two-stringed instrument from Siberia also known as a “horse head fiddle” because of the legend of how it was invented.

You can see and hear one in action here. Notice the somber sound it emits? You could do a million things with an Igil to bring more mood and depth into your sound. John Pascuzzi, the brain child behind A Single Thread uses it quite a lot in his music.

Shamisen: The Shamisen is a popular three-string folk instrument that comes from the 16th century Ryukyu Kingdom in Japan. The Shamisen resembles a banjo, but is small and slimmer.

The Yoshida Brothers are a great example of mixing old and new; they play the Shamisen in addition to the electric guitar in their music.

Eigenharp: If you are looking to add a more modern instrument, the Eigenharp was invented in 2009. It looks a bit like a rifle but is considered an electronic music instrument. A harmonic sound is made through a combination of wind delivery and percussion keys. Imogen Heap has gone on record many times as being a fan of the Eigenharp.

Didgeridoo: OK, so this one is more commonly known, but still not so commonly used. I have heard many people really play amazing rhythms on a didgeridoo, granted you have to have the lungs for it.

It has a striking look and they can be quite large so adding one of these could be a real thrill for your audience. Brian Jonestown Massacre and Midnight Oil have both used the Didgeridoo in their music.

Whether you try one of the many instruments suggested here or something else entirely, just remember, our musical worlds are only as small as we make them. You don’t need to play “World Music” to bring a little of the world into your music.