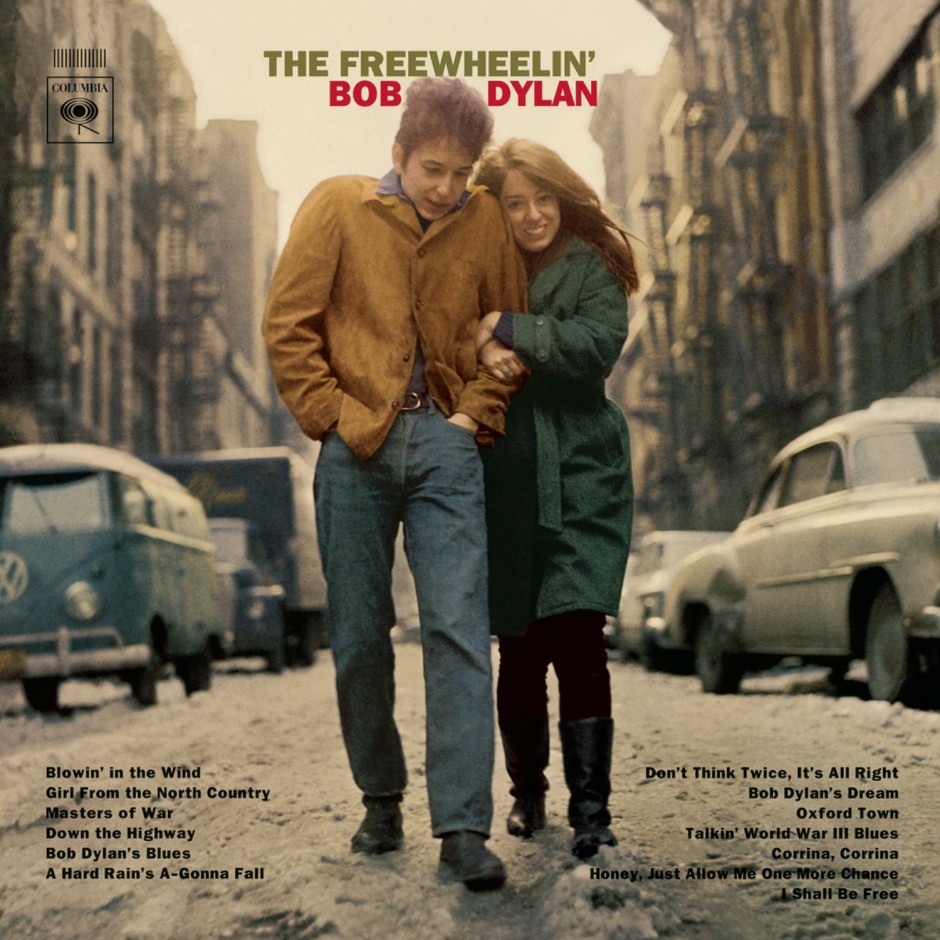 We’re back with the second feature in our Album cover location series and this time we aim to please all you Bob Dylan nerds. That’s right, it’s the turn of the iconic cover of legendary LP The Freewheelin’ this time around.

The famous photograph of a 21-year-old Bob Dylan and his then-girlfriend and muse Suze Rotolo was shot by Don Hunstein in February 1963 on the streets of a very recognisable cosmopolitan city; New York.

The iconic status of this photograph is a little tricky to explain but I’m sure it’s got something to do with that lovely “aaaw-look-at-the-young-hipsters-in-love” factor it oozes – despite the fact that the couple’s turbulent relationship ended just a year after the photo shoot!

Rotolo’s presence on the cover is also unique as you don’t see many random boy/girlfriends hanging around on album covers by solo artists. What this perhaps illustrates is the influence she had on Dylan’s music at the time (she is said to have inspired many of his songs including Don’t Think Twice, It’s Alright and Boots of Spanish Leather).

While Rotolo described herself as an “Italian sausage”, due to the layers she had to put on for the cold during the shoot, Dylan chose to shiver in a thin jacket for coolness’ sake. Of course not everyone is impressed by Dylan’s manly show-offing though. Just take critic Janet Maslin for example, who claims that the photo “inspired countless young men to hunch their shoulders, look distant, and let the girl do the clinging”. Whether this cover is showy, cool or misogynistic, there’s no doubt that the album it fronts is great.

And the image? Well that’s ridiculously famous and cute too – that’s why we like it!

Much like our previous Album Cover Location, Abbey Road, this photograph has been replicated a million times to represent love and all things coupley. Tom Cruise and Penelope Cruz, in the film Vanilla Sky, used the image to good effect, while lesser known examples (like wedding invitations) claim it’s use in a slightly sickly manner.

Now, in recreating this for yourself, you might think you could just go out on any fire escape clad street in New York wearing any old suede jacket dragging your reluctant friend/girlfriend/stranger/gimp along with you. Oh no. You’re not a true Dylan fan unless you go to that exact spot and make sure your outfit, hair and arm candy is matching right down to the awkward cut of Dylan’s denims.

After careful one minute googling you’ll no doubt find that the street in question is Jones Street, a stones throw away from the couple’s apartment on West 4th Street between 6th and 7th.

Even though the original fire escapes have long been replaced you should still be able to recreate the scene quite well, give or take a few modern cars.

Now the snow might be a difficult factor but if you’re a fan of particularly hardcore Dylan dedication (and there are plenty out there), you’ll probably wait through a whole winter in a dingy hole in New York for just the right amount of snowfall right? Personally I’d recommend not to take it too seriously. Why not even spice it up with a bit role play and convince your boyfriend to wear a wig and do the clinging?