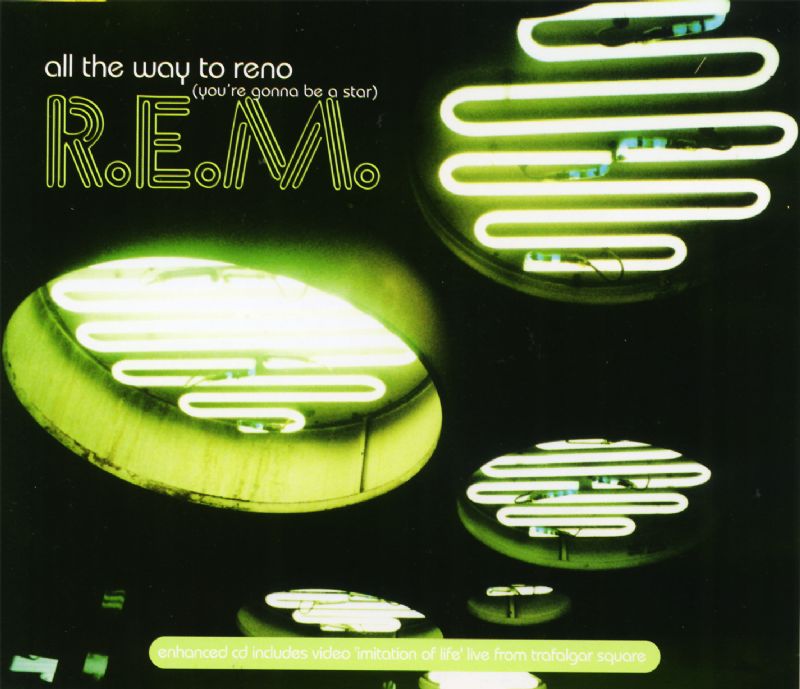 Okay, so admittedly you can’t see much of Reno itself on this album cover. It could just as easily be some overhead lights in the R.E.M. studio, but that aside this is a great song that that comes from the band’s twelfth studio album, Reveal, released in 2001.

Reno itself, a city in Nevada, US, is a fascinating city in its own right, something the band tried to put across with their lyrics “You’ve dusted the non believers, and challenge the laws of chance” alongside “You’ve written your own directions, and whistled the rules of change”, for you see Reno, the second largest city in Nevada (falling into second place only to Las Vegas), was a hotspot for people visiting to divorce one another back in the 1930s, 40s, 50s, and even the early 1960s, due to the law on divorce in Reno and some of the surrounding Nevada area being opened up more liberally for anybody across the US to take advantage of.

In this respect, the title of the R.E.M. song ‘All the Way to Reno’ is a reference to something that would have been said at the time, either among couples looking to divorce or discrete solicitors looking after their clients best interests, with regards to their divorce options, as the majority of other cities and states across the land weren’t so quick to hand out divorces to all who asked.

Reno, and the popularity of it’s quick in-and-out liberal divorce laws, made its way into popular culture a long time before Michael Stipe and co decided to sing about it in 2001. It is often quoted that Ernie Pyle once wrote that “All the people you saw on the streets in Reno were obviously there to get divorces”, and the novelist Ayn Rand, most famous for her novel Atlas Shrugged, wrote in The Fountainhead way back in 1943 (being spoken by the female character within the book)  “I am going to Reno”, using the phrase to infer she was going to divorce her husband.

Appearing in more recent popular culture, any of you who watch Mad Men may remember Betty Draper being accompanied by her soon-to-be new husband Henry all the way from New York to Reno at the start of the 1960s (and the end of season three, in terms of the show) to settle up and finalise her divorce from Don, so she and Henry could marry sooner.

Unfortunately for Reno, though luckily for all the hate-filled couples across the US, the boom of the divorce business in Reno eventually quieted down as more and more states across the country started to follow the same liberal views and offer divorces as quick and easily as Reno once did.

That aside, as the lyrics state, back then former couples were writing their own directions, and whistling the rules of change, rules which, eventually, cemented their place across the rest of the country.