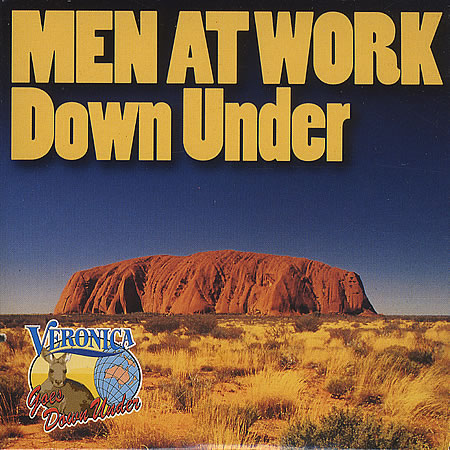 “Traveling in a fried-out combie
On a hippie trail, head full of zombie
I met a strange lady, she made me nervous
She took me in and gave me breakfast
And she said,…”

Calling all Aussies, does this ring a bell? Really the question spans to anyone else who happens to be a fan of classic 80’s hits. The song “Down Under” by Men at Work has become somewhat iconic within Australia and as it happens, one of Australia’s most iconic landmarks adorns the cover of their 1981 album, conveniently titled Business as Usual.

Uluru, also known as Aires Rock, is one of the most recognizable natural global landmarks. It screams Australia and is a centre point for many geographical theories and sacred aboriginal beliefs found within the outback. Literally sitting in the middle of nowhere (almost 500km from Alice Springs in central Australia), Uluru has this magical aura to it and is an obvious choice for the album cover of a tight and bright, rock and roll Australian band trying to make a name for themselves on the international stage.

Released in 1982, Down Under was the second single from Men at Work’s debut album Business as Usual. It quickly gained popularity on the national charts in Australia and eventually made the number one spot both domestically and abroad. 1982-1983 world song charts rank “Down Under” as a number one hit in Denmark, Canada, Ireland, Australia, New Zealand, Switzerland, the UK, and the US. This is the perfect mold for a timeless, and as some would say, one hit wonder.

“Do you come from a land down under?
Where women glow and men plunder?
Can’t you hear, can’t you hear the thunder?
You better run, you better take cover.”

Every traveller who’s been lucky enough to head south on Australia flights will undoubtedly have run into a vagabond Aussie heading the other way. It is almost a rite of passage within Aus for the 20-something university grad to pick up their backpack and hit the road. Often, I’ve found that Australians will travel for a year or two at a time before returning home for whatever reason. The term “land down under” quite obviously is associated with Australia and happens to be a point of pride for many an Aussie living a life nomadic. The song by Men at Work was perceived internationally as a Nationalistic Australian anthem, and interestingly Colin Hay (lead vocalist) has been quoted as saying the opposite.

“It’s ironic to me that so many people thought it was about a specific thing and that really wasn’t the intention behind the song. If you listen to ‘Born In The USA,’ it’s a similar song in that there’s a lot of nuance missed because people like drinking beer and throwing their arms up in the air and feeling nationalistic. It’s ultimately a song about celebration, but it’s a matter of what you choose to celebrate about a country or a place. White people haven’t been in Australia all that long, and it’s truly an awesome place, but one of the most interesting and exciting things about the country is what was there before. The true heritage of a country often gets lost in the name of progress and development.”

Uluru has been around for centuries, possibly even before the indigenous tribes rose to the top of the food chain in Australia and long before the introduction of the white man. Down Under is a song about the plundering of the continent, about selling out, over development, and the loss of spirit found within the population.

The song has been interpreted as a nationalistic anthem within Australia, one provoking pride and community, and the cover art of Uluru only helps to support this feeling. However, I see it as a symbol to a nation, a symbol provoking change through the beauty and simplicity of image. There is an undeniable spirit found within the everlasting natural beauty of Australia and Uluru is the most recognizable of these landmarks. It is a beautiful contrast found within a popular album, song, and band.