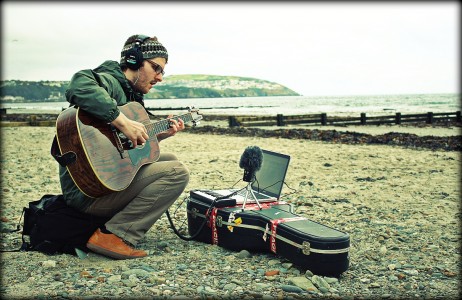 Rest easy, lovers of travel and music. We’re back again with our series Travel As I See It, and this time around we’re talking to Adam Kendrick-Kewley, otherwise known as Whatthe Animalssay. From the Isle of Man, this man travels the world with his guitar recording music but never playing it live. We sit down with Whatthe Animalssay to find out exactly how that works, where it’s taken him and where he’s headed next.

Hey Adam! Thanks for joining us. For those who don’t know about you, can you introduce yourself?

I go under the name Whatthe Animalssay. I was born and raised on the Isle of Man. I have been traveling since 2005 with my acoustic guitar, writing, recording and uploading as I go. So far I have been to 37 countries and have two albums, Cos789 (2008), Bears Will Eat Their Young (2010), and an E.P, I am a Pilgrim (which is free for download from Bandcamp – 2012).  My two loves are music and traveling, so I put them together and it seems to be working very well.

Would you say that travelling has an influence on your music and/or lyrics?

Totally! It’s why I travel. I seek inspiration by going to unfamiliar places, thriving on the ambience of a grotty room watching the cockroaches and hearing the curious sounds from outside my window. I’m a believer in suffering for your art, although ‘suffering’ might be too strong a word as I do like what I do. I don’t necessarily write about my day to day goings on, but I find a very different perspective as a foreigner. 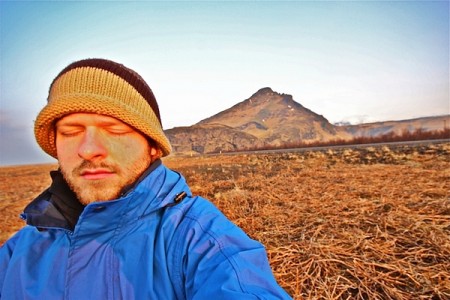 How has music enabled you to travel the world? Financially and spiritually?

Well, I do make some money from all this, but I don’t do gigs, so there is a large hole in my income. The way I combat it is (as I said) to stay in cheap rooms in inexpensive areas – eating and drinking where the locals do. The plus side is that this type of life style is incredibly effective in stimulating creative flow. Spiritually I have grown too: I don’t tend to see the world as how it is portrayed in the news/television. Most people are good and kind and want to talk to you about your life and share their time with you. If you have not traveled I’m not sure you can call yourself a world citizen.

Well, I travel with a backpack, an equipment bag, and a guitar; so often it is hot and sweaty. My guitar is in a hard case so that it can travel anywhere with me, and it has – it’s been everywhere from being tied to the back of a scooter (I rode for five days around the island of Bali), to being strapped to the side of a camel in Mauritania; Western Africa. I suppose the reality is that sometimes it can just be boring and lonely, constantly worrying about your stuff being broken or worse….stolen! Sometimes you can go for weeks not feeling like writing and end up just sitting around listlessly. But generally there are other travellers and some really interesting people to take your mind of the bad moments.

What’s one thing can’t you travel without?

I’d have to go for my iPod, which I’m sure is the top answer for most people. I do however need a book handy but you can get books everywhere. Music has the ability to make the bad seem ok and the ok seem great. Listening to ‘Dark side of the Moon’ whilst riding a train through India is still a highlight of my life.

Can you name your best and worst moments when travelling the world?

My best moments: I traveled India for a year and loved pretty much all of it; lived in Melbourne working as a silver service waiter; raced the clock over land to get to Transylvania in time for Halloween; road tripped around the USA for six months; Couchsurfing; Cycling from Reykjavik to Vik… 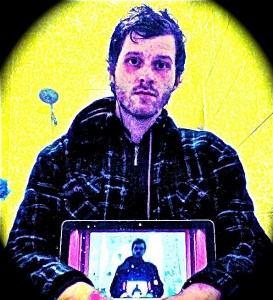 That’s not really something I know much about. I’ve never been into live music, either watching or performing; I can’t even think of one I’ve avoided. There’s a big festival in Glastonbury every year, but I forget what it’s called.

What’s your all time favourite place that you’ve travelled to as a musician and why?

India. It was the first place I went when I decided to road compose, I was there from 2006 to 2007 writing my first album ‘Cos789’. When people talk about India they always seem to use such clichés as “it’s magical” and “it was a life changing experience”. The thing is – it’s true! India will test you, then embrace you, then show you how beautiful life is. If YOU happen to be reading this and you’ve been thinking about going off traveling somewhere, then India is that place. It’s magical, and it will change your life!

What’s your next gig or travel destination?

My next travel destination is China via India, Bangladesh, Nepal and Tibet. This will be my first big trip in a couple of years and I have all new equipment, so in effect I’m taking it up a notch.

Big thanks to Adam for taking the time to share his adventures in travel and road composing with us! You can get in touch with him about his musical persona, Whatthe Animalssay here.