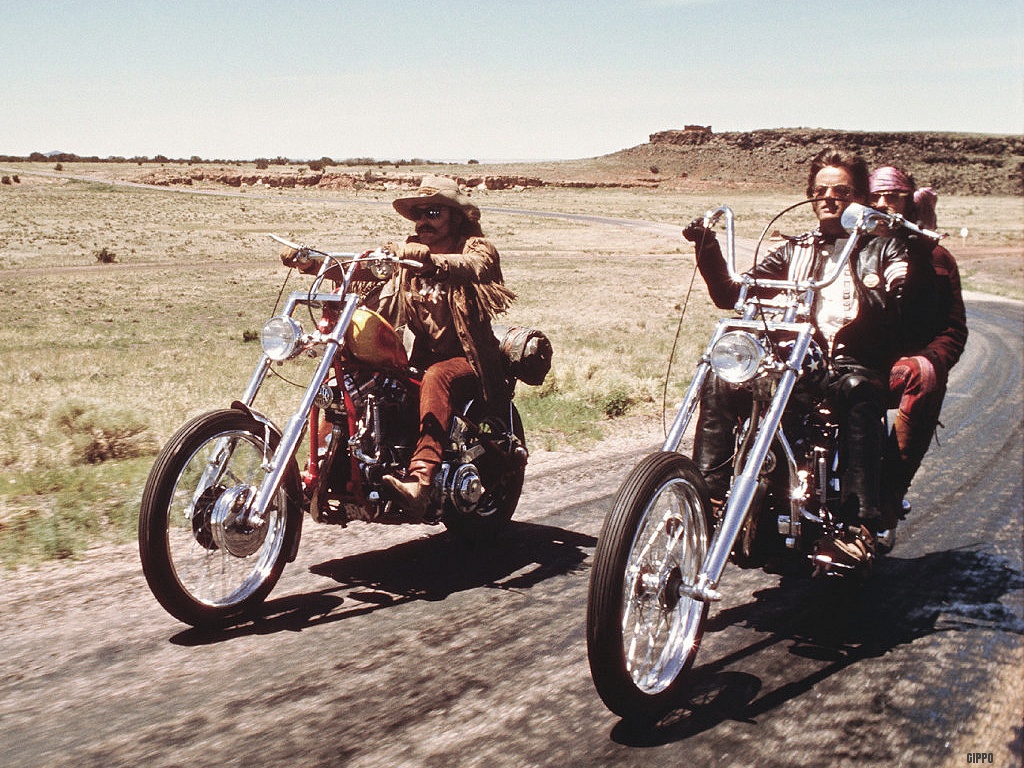 What is it about a road trip that seems so enticing? The wide, open spaces? The endless possibilities? The freedom?

Whatever the reason for a road trip, the right musical accompaniment is important. After all you need something to entertain you en route. So whether you’re clocking up the miles in the southern United States, camping it up across Australia, or simply scootering from London to Brighton, here are some top road trip soundtracks to keep you entertained.

The classic road trip takes place in the United States. It features long stretches of desert road, suspicious town folk and a sense of adventure. Crank up Born to Be Wild on the stereo and close your eyes – instantly you could be there.

It made the top five in Top Gear’s Greatest Driving Song Ever, but it’s not just Born to Be Wild that makes Easy Rider the perfect road trip soundtrack. It also includes songs by The Byrds, Jimmy Hendrix and Bob Dylan. Download it from iTunes if you fancy a listen.

If the sounds of late 60s America have inspired you to organise your own road trip, start planning on the Discover America website.

Set in and around Chicago, the road trip itself may be filled with mayhem and car crashes, but the soundtrack can’t fail to get you singing and dancing along.

It features musical cameos by the cream of the soul and blues scene, including Aretha Franklin, Cab Calloway, Ray Charles and James Brown, amongst others. For a reminder of just how good it is, see the full track listing on IMDb.

Fancy another listen to Minnie the Moocher, Gimme Some Loving and other Blues Brothers’ classics? The soundtrack is available to download from iTunes.

3. The Adventures of Priscilla Queen of the Desert (1994)

This colourful tale of three drag queens crossing the Australian outback in a bus proves that not all road trips have to take place in the United States.

The soundtrack is as fabulous as the costumes, which won their designer an Oscar. Featuring camp classics like I Will Survive, Shake Your Groove Thing and Mamma Mia, it’s disco-tastic to listen to. Want a reminder of just how great it is? Download the tracks from iTunes.

With miles of open space and stunning scenery, Australia is the perfect place for a road trip. Whether you want to tour the coast or explore the outback, get more information from Australia’s tourism website.

The tale of a dull, aging Don Juan visiting a string of ex-girlfriends in search of his son may not seem like your standard road trip, but Jim Jarmusch’s film has a gorgeously quirky soundtrack.

Fancy following in Bill’s footsteps? Discover the states of New York and New Jersey for yourself.

Two forty-something guys decide to tour the wineries of Santa Barbara County and are accompanied throughout by a gorgeous jazz soundtrack. It was composed especially for the film by Rolfe Kent, who was nominated for a Golden Globe Award for Best Original Score for his work.

The instrumental tracks are easy on the ear and the perfect accompaniment to a lazy country drive on a warm day. Alternatively listen to the Sideways’ soundtrack as you take your own tour of California’s vineyards.

More information about visiting the region is available from the Santa Barbara County website. The soundtrack can be downloaded from iTunes.

Probably the closest you can get to a UK road trip. A group of London Mods ride their scooters down to Brighton one Bank Holiday weekend.

Transport yourself back to the mid 60’s with the Quadrophenia soundtrack, which is evocative of its time. Featuring songs by The Who, The Ronettes, The Supremes and Marvin Gaye, you can download the tracks from iTunes.

Alternatively, plan a day out in Brighton and visit some of the locations featured in the film. It hasn’t changed much! If you feel inspired to buy your own scooter, you can find some great deals online. Just don’t forget your scooter insurance!