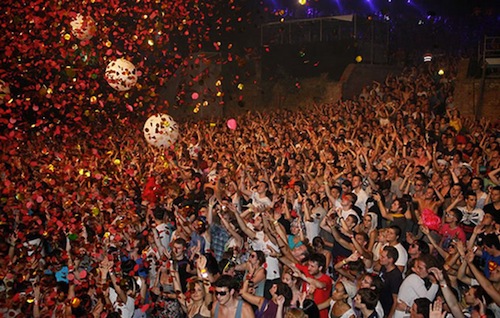 Over the years, the Sonar festival in Barcelona has gained a lot of popularity, and there are thousands of people who are considering it every year. Featuring electro, hip hop and alternative dance music from all over the world, the festival is certain to entertain anyone who decides to participate. Those who don’t have the time to go to this festival in the weekdays, going on a Friday is the best choice, because it allows them to encompass “Sonar By Night”. Being a UK club junkie and spending most of my time listening to this type of music, I didn’t really know what to expect of this festival, so I just went with the flow. And boy was I happy to take this decision.

I was there and fully enjoyed this show in 2007, after an hour or so after the Beastie Boys had started to play their awesome music, the place soon started to get crowded. Next up to show his skills was DJ Code with Fatkut, which really made the crowd cheer with their awesome hip hop beats. After they called it a night, Nicole Willis & the Soul Investigators were next and the really made quite an impression. I didn’t really know anything about Finnish should, but there was something mysterious and wonderful about this band that I couldn’t decipher until I heard the singer’s unique and entrancing vocals. I immediately compared them to The Brand New Heavies, but the singer actually managed to belt some very cool vibes. It’s when I heard her sing that I said to myself “I need to add these guys to my music collection”. By the time I was getting so much into the festival, I had to take a break and head over to the nearest store to get a refreshment. When I returned, a Finnish group called ACCU was playing and I had to admit that I kind of loved their tunes. Emanon was next and with their high pitched vocals, rapping, human beat boxing and live trumpet playing, it was a concert of sounds you’d never want to miss.

If this was enough to convince you of how amazing this festival is, then you may certainly be interested in getting tickets for next year. The good news is that the tickets for 2014 can be purchased for a very low price currently, but the offer is only available for the first five hundred tickets. After collecting the tickets though, you should make sure you take a close look at the collection requirements you receive from Ticketmaster when you purchase your ticket and then bring it with your passport, national identity document or any other type of document which can identify you. On top of that, you should also bring the credit card you used when purchasing the ticket, but also the purchase booking confirmation. Co-op Travel is one great group that can help you plan your vacation to Barcelona if you decide to go to Sonar next year. Make sure you do a little homework before you head to Barcelona, because the city offers lots of attractions for visitors.

As this article conveys, going to this festival in Barcelona you will certainly have a great time, but you need to book the tickets in time to take advantage of good pricing and a good seat. With that being said, all I can say is enjoy the Sonar Festival and have fun!