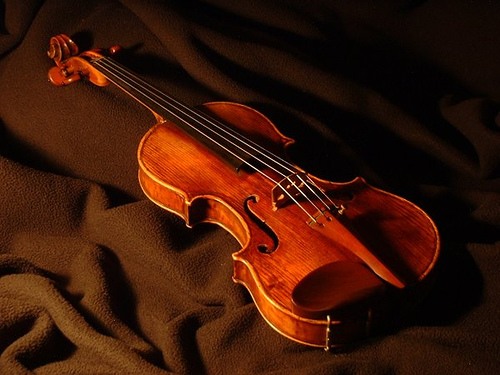 Looking for a little musical motivation to take a trip to New York City? Then check out Alexandra Cash’s look at the Met’s stellar exhibit on rare Italian stringed instruments.

The Metropolitan Museum of Art in New York City is featuring a special exhibit from the private collection of the late music appreciator Sau-Wing Lam through June 30th, 2013. The exhibit includes his collection of nine violins and one viola, which is one of the finest collections of violins and violas in private hands. This is the first time that that this Lam collection has ever been displayed in the United States. Two masterpieces included in the collection are the Baltic violin by Giuseppe Guarneri “del Gesù” (1698-1744), and the Scotland University and Bavarian violins by Antonio Stradivari (1644-1737).

Giuseppe Guarneri “del Gesù” has been called the greatest violin maker of all time. Coming from a family of luthiers (stringed instrument makers) his work strayed significantly from those of his family tradition and it took on a character that was uniquely his own. His work often was thought to rival that of Antonio Stradivari.

Also an Italian born violin maker, Antonio Stradivari was also one of the world’s finest violin markers. Stradivari was successful in creating beautiful works of art that set the standard for perfection  in world music. Despite his success, he continued to look for ways in his lifetime to perfect a better design. He succeeded in finding a way to develop a deeper, fuller sound in his violins, different from the lighter sound of his time. This exhibit coincides with the 275th anniversary of Stradivari’s death.

Along with this exhibit four concerts will be presented in the Grace Rainey Rogers Auditorium. In this performance series a selection of instruments will be played from the collection by New York’s dynamic young Salomé Chamber Orchestra and guest artists. The Salomé Chamber Orchestra is a vibrant string ensemble performing without the use of a conductor, formed in 2009. They are dedicated to performing the works of both well-recognized and underappreciated chamber composers to create a wide blend of performances from baroque to contemporary. One performance by this group took place on December 22nd, 2012 and three others are scheduled for February 2nd, April 12th, and May 5th. Tickets for these events cost $35 and can be obtained at metmuseum.org/tickets.

Sau-Wing Lam was born in Shanghai, China and after obtaining a degree in economics, he moved to New York City in 1948. Lam then became president Dah Chong Hong Trading Corporation, Inc., a business that established some of the most successful automobile dealerships in the United States. As an amature violinist and violist he bought his first violin in the 1960s and over the next 25 years assembled a very important collection of treasured pieces.