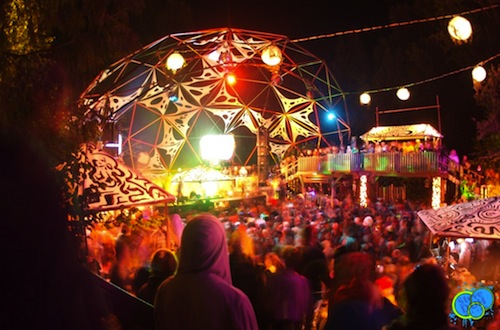 Held every August on a large farm acreage just outside the small locale of Salmo, British Columbia in the heart of Canadian wilderness is an annual phenomenon, both from an artistic and music perspective. Shambhala originally found its inspiration in its larger American counterpart, Burning Man, which is a massive communal event emphasizing community, self-expression, and radicalism. And, most importantly, a complete lack of corporate sponsorship – everything is run by volunteers.

Over the years, however, Shambhala (although still including all of the above qualities) has developed into one of the most renowned and exciting music festivals on the West Coast, drawing hundreds of different artists, DJs, and music lovers from across the country. Many people have referred to it as the “little Woodstock that just keeps happening”. Creativity abounds – elaborate costumes, painted school buses, face-paint, fire twirlers, and a trampoline, there is very little you can’t find if you’re looking hard enough.

And 22 hours a day during the three main nights music is pumped through the laser-illuminated canopy.

The festival is comprised of six stages, all with imaginative themes and all corresponding to a particular ‘feel’ or theme – the Labyrinth features easy-listening psychedelic tunes, the Living Room down by the beach with slightly more organic influences, and the Village (inspired by the Ewok villages in Star Wars) generally hosts the hard-core fast-paced rave artists crowded into a circular enclosure. Although it’s quickly become a venue for local artists in the region, specifically Nelson which boasts a remarkably talented musical community despite its small size, it also brings many of the biggest names in dubstep, electronic, trance, and alternative. Major and returning guests include Dub FX, Bassnectar, Lux Moderna, Bryx, and Gramatik, but every year the line-up is a never-ending dynamism of old and new guests.

During the daylight hours the music takes a decided shift, and almost takes on a neo-folk feel, with vocalists and guitarists keeping the beat alive and some more unusual acts taking the lead – whether it’s the strenuous hypnotism of a djembe band or the low mournful rumble of a didgeridoo. And for the amateur musicians, it’s not uncommon to be walking back to your camp and be drawn into jamming with other guests wielding banjos, harmonicas, and some instruments that don’t even have a name.

But as much as it’s a music festival, it’s also a cultural festival, where the original Summer of Love philosophies of one-love and community become manifest. In recent years they’ve taken several “green initiatives” to lessen garbage, encourage composting, and have set up numerous gardens. An alley of canvas tents line the main plaza where artisans sell their home-made wares, from elegant and elaborate clothes to leather accessories to masks that would make the Phantom of the Opera jealous. Down by the beach plywood is assembled on a platforms for graffiti-art competitions.

Everywhere there are smiles, and before the end of the festival, you might end up coming away with a new family. If you can afford the $300 for a ticket, that is. However, Shambhala, because it is run on the efforts of volunteers who take a break from gaming and other hobbies to run the festival, offers opportunities to help out with various aspects of the event in exchange for a ticket, and a result hundreds of volunteers apply every year.

About the author: Simon is a writer and content specialist who is addicted to being on the front page of anything.  A graduate of Dalhousie University, he specializes in using the em dash too often. Currently, Simon rests his typing hands in Vancouver, Canada.  Check out a recent example of his posts on gaming and travel.